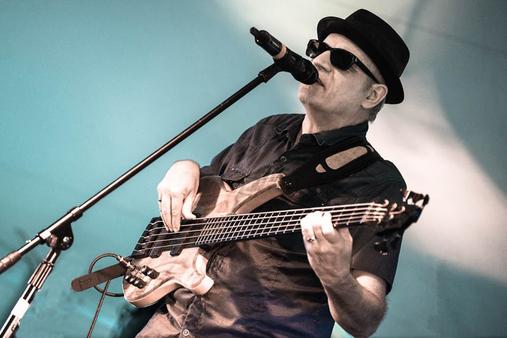 Ron began music studies at a young age, having been influenced by various family members. He continued music studies in percussion, guitar, bass, French horn & trumpet, in private schools and studios for 10 years. Ron later studied at college level and began work as a music educator/tutor in 1979. He is presently registered as a guitar, bass & theory tutor RGT, the University of West London, in the UK  (Canada division). He’s attended past workshops/master classes with teachers such as jazz guitarist "BARNEY KESSELL". He has worked as multi-instrumentalist in theatrical productions and pit orchestras. Ron earned an illustrious reputation as a valued sideman for decades with many artists.
Ron has toured Canada, as bassist with former Rolling Stones' guitarist "MICK TAYLOR". He has worked as bassist and guitarist for producer/Canadian Idol Judge “ZACK WERNER”. Ron has worked with jazz crooner JERRY DOUGLAS (aka John Abbott of THE YOUNG & RESTLESS). He has also done stage performances AS BASSIST with bluesman “SONNY RHODES” while on tour in BC. Ron’s studio credits include numerous  jingles, demos and CD album session work in Ottawa, Toronto, Barrie, Kitchener, and Sudbury. His on-stage persona has been captured in videos on CMT, and educational videos in Quebec. He has appeared as sideman on Canada AM as well as numerous Breakfast Television shows. His work as producer/arranger and session player has garnished him Top 20 spots in the UK, Germany, Holland & the Netherlands. He has written and produced soundtracks for educational video productions.

Ron comes from a long line of teachers/tutors in the family, with focus on kids with learning disabilities. Being a father of two daughters, he understands communication with kids, and uses the best tool known: Music as communication.

Ron is presently working with several Ottawa based bands: